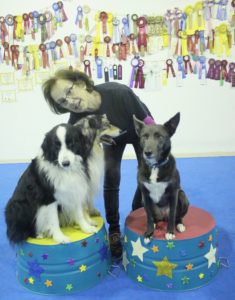 Roz Granitz B.A., M.Ed., C.T.D.I. has shared her entire life with dogs. Her first dog, as an adult, was an Old English Sheepdog who was very rambunctious and in need of training. Through a friend she learned about obedience training. Roz and Hari signed up for an obedience class and they both were “hooked.” Since that time Roz’s training techniques have evolved from one of compulsion to one of compassion. Learning and applying the methods of positive motivational training have brought success in and out of the show ring. All three of Roz’s Old English Sheepdogs earned many obedience titles. Early in the 1990s Roz learned of “a new sport” Dog Agility. At the same time Roz had added two Australian Shepherds (Kanga & Brava) to her family. As she stepped into the agility show arena, Roz continued to also show her dogs in Obedience. Both Kanga and Brava achieved the highest titles in AKC and ASCA obedience with Brava being ranked the number two obedience dog in Canada. As Roz continued to show her dogs (Coffee, Speed-Oh! and Eureka!) she continued to have success at local and National events. Roz has been invited to National Specialties in both obedience and agility where she has earned national acclaim and ranking.   Her dog Coffee was ranked number two open obedience dog in the USA and was a top ten finalist at the National All Star Dog Invitational event.

Roz’s canine family now includes an Aussie, Napoli,  who was “rescued” from a mentally abusive situation with his breeder in Texas and Bleu, a border collie who was adopted from Come Bye Border Collie Rescue

Not only is Roz a competitive trainer, she is also a gifted teacher. She earned a Master of Education degree from Wayne State University and spent many years teaching high school English composition and literature. She is a proud member of the Pet Professional Guild,  a professional member of APDT, and is both a certified APDT C.L.A.S.S.instructor and evaluator. She is a certified AKC CGC & Puppy Star evaluator, an AKC Trick Dog Evaluator and a CTDT (Certified Trick Dog Trainer) and Certified Evaluator.  Roz is continually learning new techniques and teaching methods by attending seminars, webinars and classes. She continues to be both a student and teacher. Roz is the owner of My Hero Dog Training 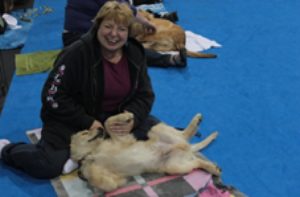 * Training her own dogs for over 40 years

*  Earned all of WCFO’s Proficiency Tests with 2 separate dogs

* Workshop presenter in Canada and the US 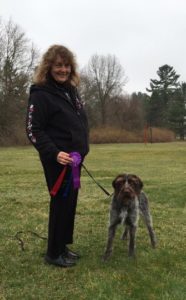 Linda Blanchard was in the show ring on her 8th birthday in junior showmanship, and has been showing dogs over 45 years!    Linda has taught many conformation and junior showmanship classes, as well as judged many junior classes and conformation sweepstakes!  She also teaches conformation at Camp Gone To The Dogs in Vermont.  Linda trains and competes in conformation, obedience, rally, hunt tests and musical freestyle with her German Wirehaired Pointers.  She just returned from showing at Westminster where her GWP “Maksim” was Best of Opposite Sex!  Always respectful of her canine partners, Linda trains only with positive reinforcement. 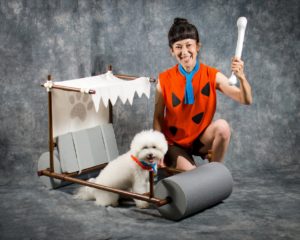 has been passionate in canine musical freestyle with her current 4-legged partner, Kei the Bichon Frise, since 2010. They have received numerous first places and special awards in competitions, including multiple High Technical Merit and Artistic Impression Awards and many other awards given to the highest scoring team. In 2016, they earned their Perfect Dance Partner title, the highest title in the World Canine Freestyle Organization (WCFO), and Kei is the first and only Bichon that has finished it.

Kei is also known as an excellent trick dog, and he is the first and only Bichon that has earned the Trick Dog Expert title in Do More With Your Dog (DMWYD).

Yoko teaches and/or assists trick and freestyle classes at Camp Gone to the Dogs in Vermont.

She is a graduate of PetMassage Training and Research Institute and has enjoyed her life as a certified dog massage practitioner since 2010. She is also a Reiki practitioner and her unique approach with the combination of massage and Reiki helps dogs enrich their lives physically and mentally.She is also a DMWYD’s certified Canine Conditioning Coach (CCC). She is eagerly and continually learning how to help dogs stay healthy and perform safely and comfortably.

Sharon Drescosky has been training dogs since her very first training class in the early 1980’s.

After acquiring a shy, timid dog that she found difficult to teach, she enrolled in a training class and has never looked back. Acquiring other dogs with different challenges drove Sharon’s desire to learn more about behavior. Sharon was among the first to take the very first nationally recognized certification exam offered by the Certification Council of Professional Dog Trainers (CCPDT) and has earned the title of Certified Professional Dog Trainer (CPDT).

Sharon is a professional member of the Association of Pet Dog Trainers (APDT) and is an Associate Member of the International Association of Animal Behavior Consultants (IAABC). She is also a Canine Good Citizen (CGC) and Puppy S.T.A.R. Evaluator.

Sharon’s dogs are all rescues and have been instrumental in helping her learn to deal with a variety of behaviors and to better understand the bond that can exist between human and canine.

Sharon has trained, competed and titled with various dogs in Obedience, Flyball, Rally and Agility. She currently trains and competes in agility but feels one of her biggest accomplishments was learning how to better understand and communicate with her dogs and helping others do the same.

Sharon teaches a variety of classes from puppy to agility, offers in-home private lessons as well as behavior consultations, Reiki and canine massage.

As a dog trainer Dawn has dedicated herself to helping clients understand the behavioral cues of their dogs. She feels that each dog and human display unique energy and body language. Dawn works through a variety of positive reinforcement techniques to find the one that works best for each individual partnership. Her focus is on having fun while creating happy and successful relationships between people and their canine companions.

Dawn started training and researching dog behavior while volunteering with Come Bye Border Collie Rescue and adopting two rescued border collies. Both having feral backgrounds and deep seated fear issues, her goal was to help them have the best, most successful lives they could, based on each of their individual needs. After several years of successfully training and watching her dogs excel in tricks (each dog holding multiple trick titles), obedience and agility, she decided that she want to help others experience the joy of seeing their best friends find balance and fun in their lives too.

Dawn continues to volunteer in rescue doing interviews, evaluations and teaching, including being an instructor for the Perfect Puppy class at My Hero Dog Training where she has succeeded in helping many people and their dogs to come together as happy thriving teams.